The 7♭5#9 chord is one of the four most common altered seventh chords that you will see in music, especially in jazz. I cover the intervals in the 7♭5#9 chord, the notes in the D♭7♭5#9 chord, its resolution tendency and how to use the chord. Also, I have open and closed guitar chord voicings for the 7♭5#9 chord in the key of D♭, as well as 7♭5#9 with the ♭9 added.

The 7alt chord: What is it?

The “alt” of 7alt comes from the altered scale, the 7th mode of the melodic minor scale. It is basically a dominant 7th chord that has non-diatonic chord tones.

The strictest definition is that 7alt chords have both an altered 9th and an altered 5th leaving only 4 possible chords. I like to think of them as 2 7♭5 chords and 2 7#5 chords

However, I like to add to that list, dominant seventh chords with an altered 5th OR an altered 9th, which adds the following chords to the ones above:

But why stop there? You could also include dominant 7th chords with a #11 or ♭13:

Check out the Wikipedia article on the Altered Chord for an inclusive and in-depth view of the subject.

In that article, it mentions the possibility of including both the ♭5 and\or #5 and ♭9 and\or #9. That is 4 altered chord tones plus the 3 tones common to all dominant chords: the root, major 3rd and flat 7.

Here are the chord tones for the 2 D♭ chords: 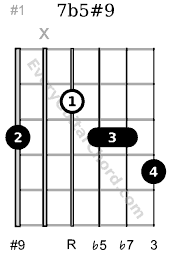 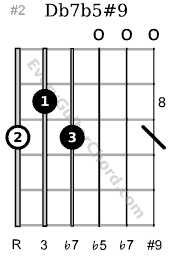 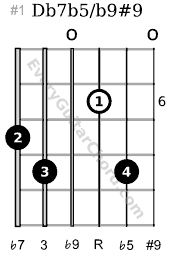 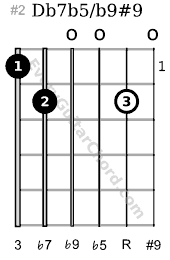 D♭7♭5#9: For the second closed shape, I put a 5-string barre even though you only need to barre the bottom 4 strings – it’s easier to hold it that way. You could even barre all 6 if you find it hard to hold.  #1 & #2 for the open chords sound identical unless you fret the optional note on the high E string of #2 which sounds super eerie. I like #’s 2 & 3. #4 sounds bad but I only have 4 chord shapes so I included it anyway.

Both chords have 2 tritones in them, between the M3 and ♭7 and the root and flat 5. As a result, you get the 4 strong tendencies that I mention above. So let’s look at how to use these chords using a D♭7♭5#9 chord:

1) As a leading tone chord to a D major chord

So #’s 1 & 2 are straightforward if you ask me. But the 3rd tendency is interesting. You can make a radical key change to the tritone and do it smoothly. And of course, that could be a temporary key change where you go back to the original key with the V7 chord or another 7♭5#9 chord.

Mess around and find something you like. I also noticed, that the D♭ 7♭5#9 chord also seems to resolve to both G major and A major which is odd. Try it out for yourself and let me know if you disagree.

The tendency for both chords in roman numerals with the 7♭5#9 chord as I is to ♭II, IV, ♭V, V, #V, and VII. Hopefully, that makes sense to you.

Try out the 7♭5#9 chord if you want to add some nasty tension in your songs and give your lead guitar player some juicy notes for his riffs. Also, check out the other 2 articles I have on 7alt chords:

I hope you found some useful chord voicings and a clearer understanding of 7 alt chords. Have fun jamming, experimenting, and writing!