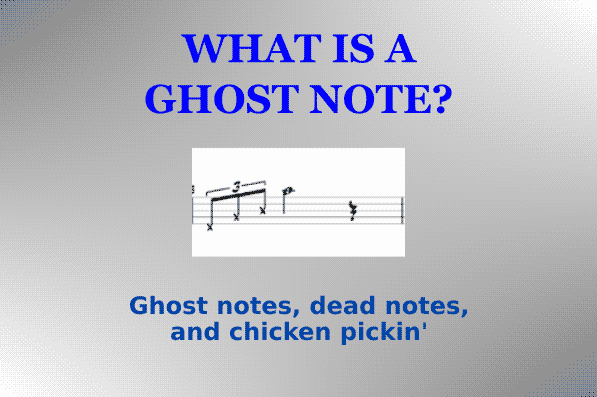 This is the first technique that deals with percussive effects on the guitar. A ghost note is basically a muted note, or notes, that is played with no intention of sounding the pitch of the note. It’s a groove thing in my opinion. This is a common technique you’ll often see in country music, but in no way limited to only that genre.

Playing ghost notes requires a feel for the rhythm of the song and what you want to project in your playing. You need the “feel” to make it sound good. I cover this basic technique and have guitar TAB examples.

What is a ghost note on guitar?

I try very hard not to use Wikipedia if I can help it, but when they sum up a topic better than I can, then I have no choice.

In music, a ghost note is a musical note with a rhythmic value, but no discernible pitch when played.

The actual technique involves playing a string that is muted by the fretting hand, though you can also use your picking hand and palm mutes. At some point, you mix in fretted notes so you get an off and on effect – muted and played.

They are notated either as a note in parentheses or with an “x”. You can also call them muffled notes since that is basically what you are doing. Another version of a ghost note is to play a faint note, drastically decreased volume but that is an exception as opposed to the standard ghost note. Experiment to find the sound you like.

Examples of ghost notes on guitar (rakes and muted chords)

Rakes and playing muted chords are common methods of playing ghost notes. Here is an example based around an A major chord.

Chicken pickin’ is almost always played with hybrid-picking and is performed by picking a muted string(s) throughout your licks. The next three examples are from some country guitar books that I own.

You could also play the notes above on the “and” of each beat for a different effect.

This one uses triplets to lead up to your target note.

I don’t know this song, but if you do then have a listen and see if you can hear the ghost notes.

I see ghost notes on guitar as a way of getting a rhythmic feel to your licks. Playing a barre chord and then strumming the same shape while releasing pressure can create a great rhythmic effect. Especially if you mirror things the drummer is playing. You can tease the crowd by having them not know what song is coming. Then you break into a chorus and BOOM everyone knows the song! Give that a try.

Check out my 25 Guitar Techniques article for more solo and lick ideas.