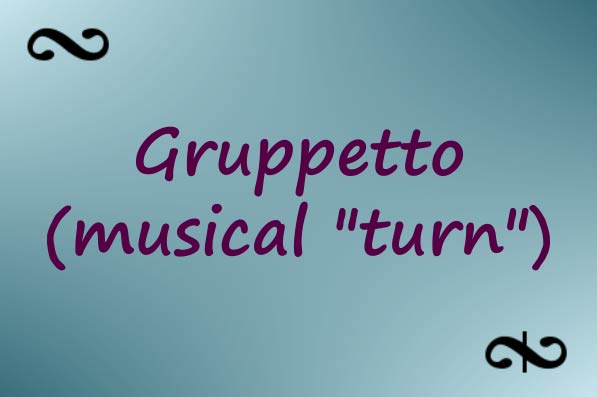 The gruppetto is a turn in music, which just means that you highlight a certain note by playing the surrounding notes. There is the standard gruppetto where you play the note above your main note, then the main note, the note below that note, and then finally the main note again. I cover that and the inverted turn and have guitar TAB as an example.

So what is a Gruppetto?

It’s easier if we start with some quotations:

An inverted turn (the note below the one indicated, the note itself, the note above it, and the note itself again) is usually indicated by putting a short vertical line through the normal turn sign, though sometimes the sign itself is turned upside down ~ Wikipedia

The symbol for a turn looks like the letter “S” on its side. The inverted turn uses either the same symbol but with a horizontal line thru it.

Definition of a turn in music (simplified)

Ok, let’s break those definitions down to plain language. A Gruppetto is an old term for what today is known as a turn in music. A turn in music is a sequence of 4 notes where the 2nd and 4th notes are your “main” note and the 1st and 3rd notes are the notes closest to your main note. You’ll see turns in one of the two the following pattern:

It’s just a 4-note lick but there is a pattern to it. And the intervals involved will change depending on what scale or mode you are using as the source notes.

Examples of turns in music

The first two measures show the notes that would be played. Immediately below each measure is how a turn and inverted turn would be notated in standard notation.

So it’s just a turn and inverted turn for the note C from the C major scale. The two adjacent notes are D (the above note) and B (the note below).

I’m sure if you are reading this that you are familiar with practicing scales in sequences of 3, 4, or 5 notes. Try single string scales in the pattern of standard and inverted turns. Don’t worry about the timing of the notes just the sequence of notes.

Here is an example in C major on the B string.

Turns are just another tool in your lick toolbox. It’s a great exercise to practice turns and inverted turns as a scale sequence, similar to scales in 3’s and 4’s. Try that for position playing scales or for practicing scales on a single string. If you can do blocks of “turns” in your solos then it will lead you to some interesting licks.

Also, check out my list of Guitar Techniques for other embellishments that can improve your playing.

Two Chord Songs (How To Write Your Own)

How To Play Guitar For Beginners: Songs First Or Theory?