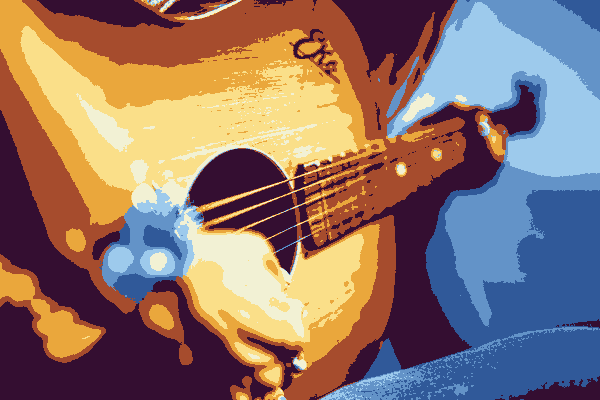 The A6 chord can be built from the major keys of A, D, and E and also from the A major pentatonic scale. It is built with the notes A, C#, E and F# which are the same notes in an F#m7 chord.

I cover the intervals used to build 6th chords, chords related to an A6 chord, how to use the chord and alternate names for the chord.

Finally, I have 7 closed and 9 open guitar chord shapes for the A6 chord and list popular songs that use the chord.

It’s just an A major triad with the major sixth added. Easy as pie, right?

It is called a 6 chord versus a 13th because you can add the major sixth note before you pass the 7th. Check out my article on Music Intervals if some of these chord terms are new to you.

But the chord most closely related to an A6 chord is the chord that has the same notes: an F#m7 (F#-A-C#-E).

Sixth chords may also be written as M6, ma6, maj6 or fully written out as major 6.

The 6 chord resolves best to the 5th of the chord (E for A6) and also to the root of the chord (Amaj or Amaj7), though not as strongly.

I have 9 open and 7 closed A6 voicings. I did not mark the fret #’s for the closed A6 chords, but I did mark which notes are the root note – so you can find A6 chords on your own and for any key. Here is a chart of the symbols I use on my chord blocks:

I need to make a note on #7, the chord marked with “(no 5th)”. That is a standard jazz shell voicing. There are some chords where the 5th is dropped and it is called a shell voicing. The problem with the #7 voicing is that it is just a minor triad with the ♭3 in the bass. I wouldn’t call it a 6 chord unless you are playing in a band with a bass player playing the 5th of the chord. 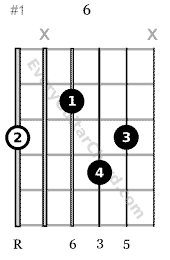 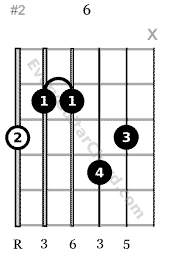 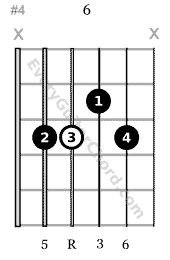 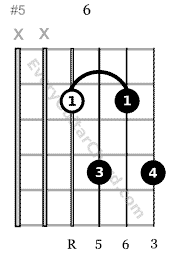 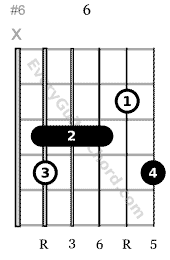 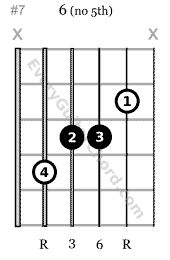 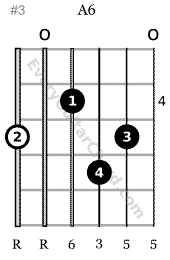 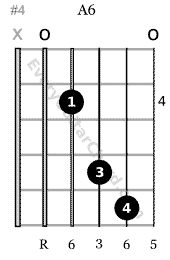 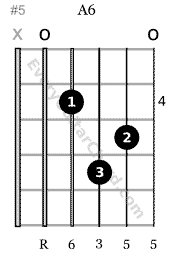 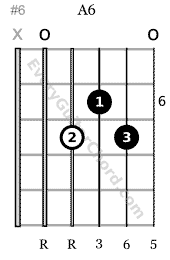 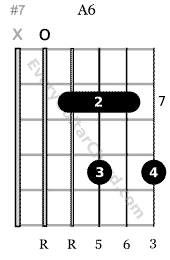 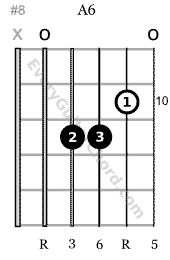 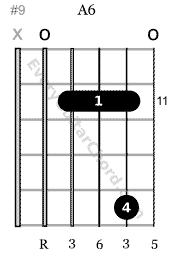 Songs with an A6

Here are a handful of songs where you can find an A6 chord:

If you don’t like the sound of any of the A6 guitar chords I have here, then try an F#m7 chord, since both chords have the same notes. You’ll see minor 7 chords in popular songs more than you will 6 chords. Check out the page on What is a sixth chord if you want to learn more about 6 chords.

I actually prefer 13’s and major 13’s over 6 chords. Thirteen chords sound amazing to me, but 6 chords are just “Ehh”. To each his, or her, own. Hopefully, you found some new chords for your toolbox. If you did, do me a favor and add a comment below.

Major Guitar Chords In The Key Of C (Triads, Adds)