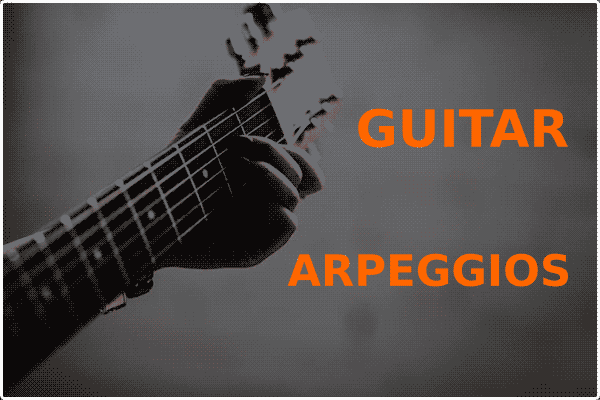 When you can seamlessly switch between different arpeggios on guitar, then your playing will drastically improve and you will understand lead guitar better. I briefly cover the importance of learning to play arpeggios on guitar and have TAB examples for E major and A minor. Hopefully, the exercises I have and my explanations will help you understand how important arpeggios are.

Arpeggios: guitar chords one note at a time

Here is a simple question and answer about arpeggios:

Q: What is an arpeggio?
A: It is a chord played one note at a time typically in the order the chord is built.

Okay, let’s explain that a little better and keep it simple. For a more in-depth article on building chords, check out my What Is A Triad article. Let’s just look at the major scale – any major scale.

So a C major triad arpeggio would be played as the single notes C-E-G-C-E-G, etc. That’s it – just play the individual notes of any chord as opposed to strumming the chord. However, there are a lot of different examples and exercises of just how to practice arpeggios. I swear by the triad triplet exercises below.

I first “got it” while watching a video by Rick Beato on Youtube. I can’t remember the name of the video, just search his videos with the keyword “arpeggio” or “fretboard”.

Don’t think about the CAGED system – just think starting on either the 1st, 3rd, or 5th of either a major or minor triad. Actually, the exercises below have you start on the 1st AND 3rd AND 5th of a triad.

The reason why starting with triads is best is that it works great for a triplet sound, there are fewer notes to worry about, and triad arpeggios lead into a great technique. And that technique is playing the “wrong” triad arpeggios over a chord (last section).

Talk about simple and basic. Here is a simple 1-4-5-1 chord progression in E major. I start by playing the bottom 3 strings of E major at the 4th fret. That is the lowest fret position I can play an E major without using open strings.

I then work up the neck by starting on the next chord tone that occurs on the 3rd string. That would be the E at the 9th fret and then G# on the 13th. Then I work my way back. FYI, that means you will be playing an E major triad for 5 beats – rooted on the 4th, 9th, 13th, 9th, and 4th frets.

What YOU need to do is figure out the patterns for strings 3, 4, an 5 and string 4, 5, and 6. That’s going to get you to learn the notes of each triad while learning those notes on the fretboard. Watch Rick’s videos if you get stuck, although he uses a 1 > b3 > 5 progression in C which results in a common tone for each chord (G).

Go as slow as you need to for either TAB exercise – you want to maintain a seamless rhythm.

Minor triad progression in A mainor

This is the same thing as above except there is only one example for strings 1, 2, and 3. Also, I switched the progression to i > v > iv because Am-Em-Dm-Am sounds better to me than Am-Dm-Em-Am. But switch up the chords however you like. 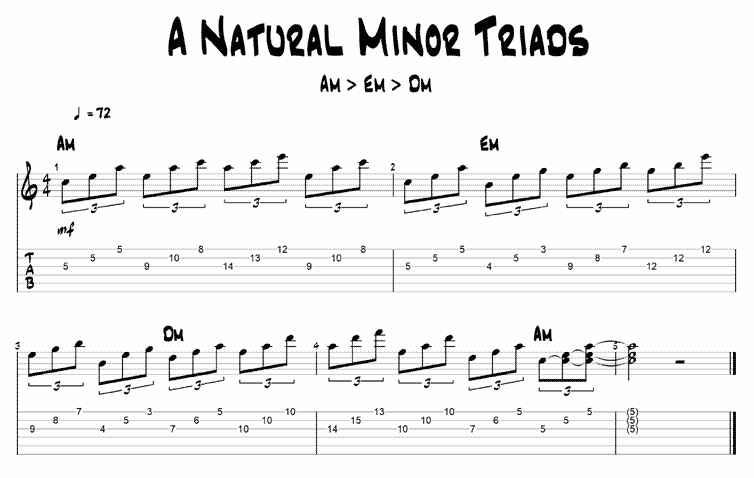 This may not be advanced but it will take your playing to a higher level. If you have any simple chord progression that stays in one key then you can play any arpeggio built on any scale degree over any of the chords. Let me explain.

So for extra credit, experiment with playing other arpeggios from the key over different chord progressions. For the E major examples above try playing C#m, F#m, and G#m over the changes.

Learn 3-note major and minor arpeggios up and down the neck. When you feel comfortable with that learn maj7, 7, and m7 arpeggios, or try major add9 and minor add9 chords. Check out the last 2 sections of my article C Major Scale Chords to see why major and minor triads and 7ths pretty much cover all popular chord progressions.

Besides Rick Beato, Michael Palmisano also covers the triad arpeggio approach to playing lead guitar. And if you are into Jerry Garcia, Michael has a lot of killer lessons on different Dead tunes. Here are the links to both of their Youtube channels:

It may be boring exercises but eventually, you’ll get it. Just keep practicing until you do.

Two Chord Songs (How To Write Your Own)

All open chords for every chord type in every key.