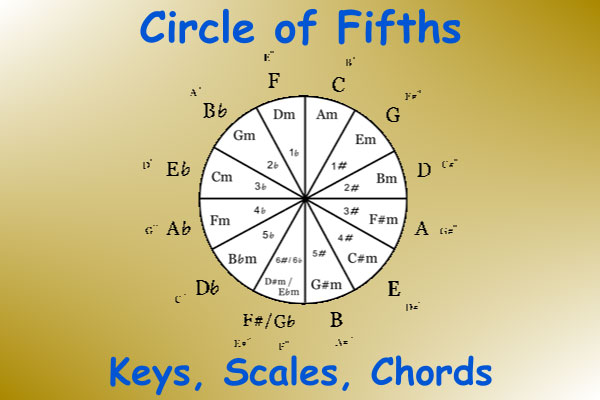 The circle of fifths is an excellent music theory graphic that every musician should know inside and out. It shows you all the notes in any major or natural minor scale and the key signature for each of those scales.

You can also use it to build the triads in the major scale, as well as use it for transposing and modulation. I have a unique circle of fifths I created which is available as a PDF file, along with a blank circle for your own use.

What is the circle of fifths and why it’s important

The circle of fifths, also called the circle of fourths, is a graphic representation of the 12 major scales in the pattern of perfect 5ths. If you do not know what a perfect fifth is, then you should stop reading this article and read my Music Intervals article – then come back!

You may have seen an analog clock face to show the 12 notes of the Chromatic Scale. The circle of fifths uses the same graphic with the 12 chromatic notes in a different order.

In case you didn’t read the intervals article, then grab your instrument and play a C major chord. Here are the notes in C major:

A perfect fifth is 7 semitones, 7 frets if on guitar, away from the root note of a chord. Major and minor triads, as well as sus4 and sus2 chords, all have perfect fifths in the chord.

Perfect fourths are 5 semitones (5 frets) and are the notes that are counter-clockwise to any note on the circle. The notes in Csus4 are C-F-G, the root, perfect 4th, and perfect 5th.

The circle of fifths gives you a lot of information in one graphic. Basically, you can figure out the notes, chords and key signatures of the major scale and the natural minor scale.

Music theory embedded in the circle of fifths

I believe the most important use of the circle of 5ths is seeing ALL the chords in any major key which you can use in your songwriting.

The chromatic scale in 5ths and 4ths

I did not include every enharmonic chromatic note, only the ones that are tonic notes for the major scale. Here is my version of the circle with the major scale tonic chord outside the circle, diminished chord above/next to the tonic major, and the relative minor inside:

Identifying key signatures from the circle of fifths

Most circle of fifths shows the number of sharps (#) or flats (♭) in each key. Some put the G clef and the actual sharp or flat symbols like the graphic I created below. I just put the # and ♭ symbol with the number of each before the symbols.

You don’t need to read music, but when you see the # of sharps or flats, you know the key of the song, and therefore what scale to use and the chords you can expect to see.

If you know the key of C major then you know that the tritone in that key is between the notes B and F. The pattern of sharps goes from the “letters” F to B while flats go from B to F. That’s without the sharp or flat symbols.

The pattern of sharps and flats in perfect 5ths and 4ths

The sharp pattern of F to B is as follows:

The first flat key is F major and the flat does not occur on the seventh degree like the sharp keys, but on the perfect 4th, which for F major is B♭.

The flats in descending 4ths follow the pattern of B to F:

Sharps are in the letter pattern of FCGDAEB (perfect 5ths), while the pattern for flats is BEADGCF (perfect 4ths), or the reverse of the sharp pattern. This is just the pattern of letters minus the # of ♭ symbols.

Enharmonic is a term that means “equal”. There are 3 enharmonic keys: C♭ / B, G♭ / F#, and D♭ / C#. No one uses the key of C♭ which equals B major (B major is rare as well). No one really uses C# major either, so the only practical enharmonic key combo is G♭ and F#.

And don’t get confused by the notes E#, B#, C♭, and F♭. Those notes are in keys that you will rarely encounter.

Here are the key signatures for each major scale with “6” being the practical cut-off:

There are 6 “practical” sharp keys and 6 flat keys. You can see the cutoff of G♭ and F#. Disregard the keys of C# and C♭. For the flats, I see the word “BEAD” followed by the V, I, and IV chords in C major. Get it?

Just reverse that for the sharp keys. Or memorize the 7th degree/chord that is on my circle and you’re good to go! The pattern of the root notes of the diminished triads is the order of sharps.

Scales from the circle

The graphic below shows the scale degrees for C major – all the natural letter names.

All the notes of the major scale are the root notes of the chords on my circle of fifths. The major I, IV and V chords are on the outside the circle. The relative minors for each major chord are inside the circle, the vi, ii and iii chords. And the diminished triad on the 7th scale degree is there as well.

I highlighted the tritone notes for C major (B & F) because they are the 2 scale degrees that are not in the major and minor pentatonic scales.

So if you pick any one note outside the circle, you can figure out the notes in that major scale. The relative minor is always the minor triad inside the circle in the same section as the relative major outside.

Or focus on one section of the “pie” or clock shape and you can determine the notes in the major scale, natural minor scale, major pentatonic, and minor pentatonic scales.

An interesting thing about the tritone in any scale is that they are the 2 notes that are sharped or flatted in the 2 neighboring keys. Take the tritone B-F in C major, F is sharped to F# in G major, while B is flatted to B♭ in F major.

This leads to the fact that the diatonic scale on either side of any major key contains 6 notes in common. And the 7th note not in common differs by a semitone.

The circle of fifths contains a lot of information!

Chords from the circle of fifths.

You definitely want to look at all the graphics in this section. For the record, I believe that everyone should learn how to build every chord by stacking thirds. Take a look at my Triads in Music article for a detailed description of how to do that.

But for people who are visual learners, then the graphics below should help.

The first image displays all the chords in the C major scale expressed in roman numerals. The 3 upper case roman numerals are the 1, 4 and 5 chords in C major: C, F, and G. The 3 lower case numbers are the 2, 3 and 6 minors: Dm, Em, Am. The 7th diminished chord is B dim in lower case with the superscript circle symbol.

If you want to write in a minor key, then I changed the relative minor in C major (A minor) to the one chord (i) and renumbered all the other chords accordingly.

I personally notate the C, F and G chords as ♭III, ♭VI and ♭VII but most people don’t use the flat symbol and just notes them as on the graphic. Also, don’t worry about the diminished triad for minor keys, or major keys for that matter. You don’t need it to write songs.

Notes in the triads

The next 3 graphics show you the notes in the 3 different triads that can be built from the major scale: major, minor and diminished.

All the notes for any chord can be found in 2 adjacent sections.

Following the arrows on my graphics, the G major and E minor chords from C major have to go to the note B under the G major pie section. That’s okay. I could have created two separate graphics for those chords where I would have pointed to the B above the C note, but you should understand now how to build the triads from the circle.

And we’re still not done with all the uses and features of the circle of 5ths!

The most practical application of the circle of fifths is to use the 3 major and 3 minor triads to write your songs. And of course, you can add notes of the scale to the triads. For example, in C major you can play a C6, Dm add9, Fmaj7, G7, etc.

If you have a chord progression already, then you can use the notes of the major scale to compose a vocal melody for the lyrics, or as the notes for your solo.

You can use the common chords found in adjacent keys to modulate to those keys. For example, if you have a verse in C major, you can modulate to G or F major using a common chord like A minor. That is one option when you go to write the chorus or bridge section in a different key.

If you want to play a song that is in a flat key, you can transpose it to a sharp key. This is a must for guitar players who prefer using open chords. Just convert the chords to their roman numeral equivalents and plug in the root notes from the new key.

Finally, you can practice scale or chord progression by cycling through every key but in the pattern of 4ths or 5ths.

Go to my Downloads page to download the circle of fifth graphic above, or go straight to the file: Circle of Fifths PDF.

The PDF file also includes a blank circle to notate yourself. If you are a guitar player, I would suggest making 6 circles of fifths. One each for F, C, G, D, A, and E major. They are the best keys to play open chords. Just leave the other “pie” sections blank so that you can concentrate on the individual keys.

Also, take a look at the Wikipedia page on the Circle of Fifths for more insights (it’s a very detailed page).

Music Intervals: What Is An Octave & What Are Intervals?