You can use the F# diminished chords from the key of G major in place of D dominant 7th chords if you want a harsher resolution to the G chord.

I cover the intervals and notes for each diminished chord and include some song examples that use F# dim and dim7 chords.

Try my 21 open F# diminished guitar chords to see if you like their sound: 13 from G major and the remaining 8 from various minor scales.

There are a total of 6 commonly seen diminished chord types, though you will only see 3 of them in jazz pieces. Here are the 3 diminished chords that can be built from the G major scale:

The strongest tendency for all 3 chords is to the I chord G major in whatever form it takes: G, G6. G6 add9, Gmaj7, etc. E minor would follow those chords nicely as well.

The next 3 diminished chords come from the G harmonic minor, A melodic minor, and the B♭ harmonic minor scales respectively. These are just for your reference. They can NOT be built from the major scale.

Although this article is geared towards the 3 diminished chord types found in the key of G major, I’m including the dim7, m9♭5, and m-maj7♭5 chords as well. I might as well. Where else would I cover those chords?

If you would like to learn the closed chord voicings for all the diminished chord types, then take a look at my Diminished Triad article. 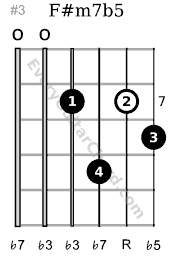 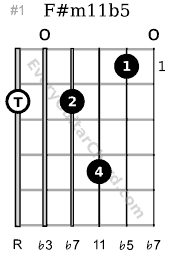 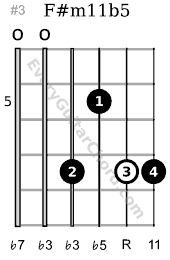 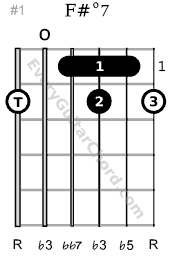 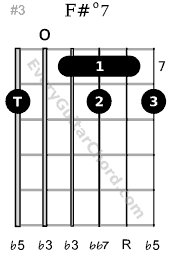 F#m11♭5: Even though #1 is difficult, it’s the most ominous of all these diminished chords, although #2 is spooky too – love them both.

F#dim7: They all sound good.

Songs that use an F# diminished chord

Here are some songs that use one of the guitar voicings found above:

Beatles: G♭dim in I’m Happy Just To Dance With You
Grateful Dead: F#dim7 in Ship of Fools
Simon & Garfunkel: F#dim in Bridge Over Troubled Water
Jerry Reed: F#dim7 in The Claw

Also look at my Diminished Chords article for example of other songs that use diminished chords, though not all in the key of F#.