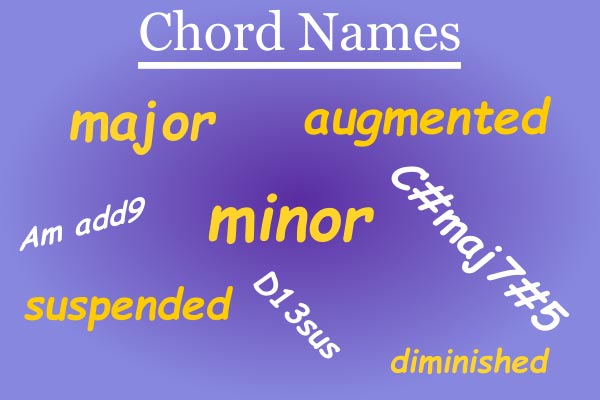 It’s incredibly easy to understand all chord names that you will ever encounter, whether you play guitar or a different instrument. I have a simple 5-step process to help you understand how to name any possible chord. To help you understand why chords are named the way they are, I will show you how to deconstruct a complex chord name. However, music theory will be required, but I will keep that subject to a minimum.

The 5 elements to any music chord

The maximum number of elements for a chord is 4 but there are 5 possible elements or components to a chord.
Here are those 5 components:

You either have a 7th or you don’t. So #’s 3 and 4 are mutually exclusive. If you have a 7th then the adds become extensions, and without a 7th the extensions are “add” notes.

Another view of the 5 elements to a chord name

Let’s keep it simple: the letter indicates the key, the rest of the chord name tells you the triad type and what, if any, additional notes are in the chord

You’ll see “m” for minor chords, “m” and “b5”  for diminished chords, “sus” for suspended chords, and “#5” for augmented chords. Major chords do not have any indicator unless there is a major 7th in the chord.

There are symbols that are used for various chord types like the triangle for major 7 chords, the superscript circle or “dim” for diminished chords, and the “+” symbol or “aug” for augmented chords. If you see “b5” in a chord without the “m” for minor, then that is a 7b5 chord with the Maj b5 chord as it’s the base chord.

Finally, you may see slash chords such as D/F# or G7/B. Those chord names are just chords with a note in the bass other than the chord root.

That’s it – done! The above descriptions are all you need to name chords. Let’s deconstruct some advanced chord names so you have examples to help you visualize the chord naming process.

Take a look at these 3 chord names and let’s deconstruct them together using the 5 step approach. I’m choosing 3 chords from C major – the scale with all-natural notes.

You would verbalize that chord name as “F major thirteen sharp eleven”.

The theory behind chord names

You need to know the 4 triad types and the other 3-note chords: sus or sus4, sus2, and Maj b5. Major flat 5 is not really a chord but it is the base of all dominant 7th chords that have a diminished 5th.

Check out the following articles of mine for insight into those topics:

The 4 Triads in Music

All Chords From The C Major Scale

Keep it simple, just deconstruct the chord name to see what the base chord is. If you are trying to name a chord that you “discovered”, then start stacking the chord tones in thirds to correctly name it yourself. It’s very simple – tonality, base chord type, adds if any, type of 7th if present, and type of extension(s) if present.