The Cadd9 guitar chord sounds great, is easy to hold and is a great chord for the songwriter’s toolbox.

I cover the notes and intervals in the chord and the basic structure of an add9 chord in general. The Cadd9 chord is built in 3 common major keys.

Everything you need to know about the Cadd9 chord

The intervals in an add9 chord are the 1st (also called the root note), the 3rd, the 5th, and the 9th. If you are new to music intervals, then do a quick read of my Music Intervals article.

There are many other types of 9th chords like major 9, dominant 9, 6 add9, minor add9, minor 9, suspended add9, and others. All those chords have additional notes or different intervals. Check out the Wikipedia page on ninth chords if you want an overload of information on the subject.

The notes in an add9 chord are equal to a suspended chord with the 6th added which I call a 6sus chord. I consider a 6sus chord (1-4-5-6) as an inversion of an add9 chord, but I have seen it in popular songs.

The Cadd9 chord in detail

Once you play a Cadd9 chord on the guitar, you will hear just how sweet the chord sounds. All add9 chords have a great sound, especially when played with open strings. And the most common Cadd9 chord shape  is easy to play!

You can build the chord in 3 different major keys:

You can also build an add9 chord on the 4th and 5th scale degrees of the melodic minor scale.

Other names you may see for a Cadd9 chord are C add9, C/9, C added ninth. I prefer using the space between the C and the add9 (C add9).

The Cadd9 chord has the same notes as a G6 sus, which is a Gsus4 chord with the major 6th added (G-C-D-E) as mentioned earlier. It’s something to keep in mind in case you ever see a 6sus chord.

Two common substitutes for the Cadd9 chord are Cmaj9 and C9. C major 9 is a Cadd9 chord with the major 7th added, whereas the C9 chord adds the flatted 7th (minor 7th) to a  Cadd9. The C9 chord is strictly from the key of F major, but Cmaj9 can be built in both C and G major.

The first 4 chord shapes are closed chord shapes for an add9 guitar chord. I marked the root note, so just move that shape to where there is a C and you have a closed Cadd9 chord. Then I have 8 open Cadd9 chords. 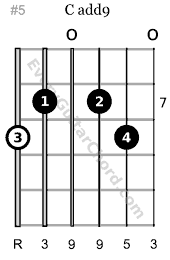 Popular songs that use a Cadd9 chord

Here are some songs that use one of the Cadd9 guitar voicings found above:

Lynyrd Skynyrd: Sweet Home Alabama
Beatles: Love Me Do, Paperback Writer
John Lennon: Give Peace A Chance
Sly And The Family Stone: Everyday People
Jewel: You Were Meant For Me
David Bowie: Ziggy Stardust
Oasis: Wonderwall
U2: Where The Streets Have No Name
Brad Paisley: Last Time For Everything

The Cadd9 chord is a bright and happy sounding chord, especially when played with open strings on a guitar. And since it is so easy to play, you’ll be wanting to add this chord to some of your original songs.

If you are not a songwriter, then try using the chord in place of a C major triad, maybe for just a beat or two. You are allowed to do that – add notes to chords in cover songs. That is how musicians sometimes cover other songs, especially jazz musicians.

Check out my article on Chords From Scales where I cover every chord that can be built from the major scale and other scales. Have fun playing this chord.

Major Guitar Chords In The Key Of C (Triads, Adds)