It’s easy to get overwhelmed by the various types and facts about acoustic guitar string. There are different sizes, different materials, different winding, etc. You don’t need a scientist or engineer to help you decide which string set to buy.

The best thing to do is to buy different types of strings and see which you prefer. The only problem with that method is that you either have to change strings often, or you need more than one acoustic guitar.
Let’s go over some basic facts on different strings then move into the meat of the article.

Here are the basics to differences in guitar strings:

Gauge: This just refers to the thickness of the strings, from thin strings to thick ones.

Metal \ Materials: There are different types of metals used to make guitar strings. The two most popular types are 80% copper & 20% zinc (80/20) which have a bright sound or Phosphor Bronze which have a darker and fuller tone.

Other factors: The wound guitar strings (Low E, A & D) have different cores (hex or round), different winding methods, and some also have coatings.

Lighter gauge strings are easier to play when it comes to fretting chords or bending strings. However, because they are thinner they break easier. They are also known for having less volume and sustain than heavier strings.

Heavier gauge strings, on the other hand, are harder to play and require more hand and finger strength. As a result, they are not a good choice for beginners. They are louder and have a longer sustain and will not break as easy as thinner strings.

You may want to consider using the string gauge I use, Light or 12’s, as they are in the middle. If they feel too hard to play then try the thinner strings, or go to thicker strings if you want a fuller sound. Start with something in the middle then go thinner or thicker based on your experience.

Your options are extra light, custom light, light, medium, and heavy. In the image below you will also see light-medium which is an additional string gauge that Elixir produces.

Don’t bother memorizing the size of each string. I only included the sizes for both E strings. You’re not going to be tested to see if you can remember the exact diameters for each gauge. 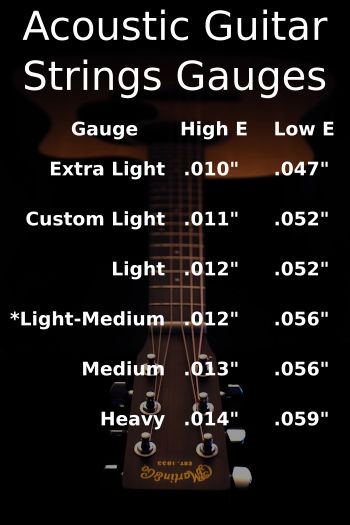 I prefer the coated strings made by Elixir, specifically the light gauge. They have coatings named Polyweb and Nanoweb coatings. One of them is a thin coating and the other is thicker. I play both and they sound great to me. Also, they go a long time without breaking!

One of the most annoying sounds to me is hearing strings squeak when you move position on the 4 wound strings. That is kept to a minimum with their coated strings. I’m fine with the slight loss of tone if it also means little to no squeak.

The choice is yours. You could go middle of the road and buy light gauge guitar strings and size up or down the next time you change strings. As I mentioned above, I prefer the light coated Elixir strings so give them a try.

Check out my article on making a Guitar String Bend map for your guitar and string combination. It’s a great idea to know how far you can bend each string at various fret positions.