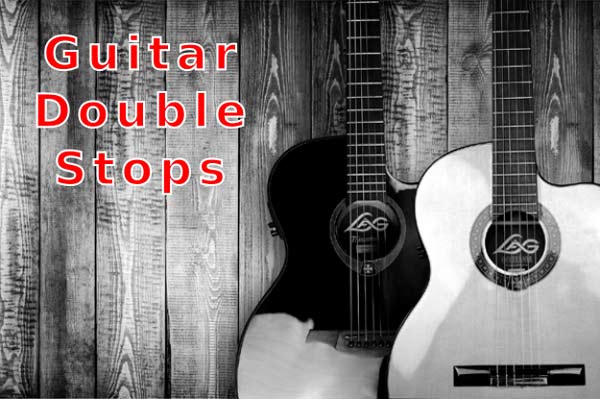 If you play two notes at the same time then that is known as either a guitar dyad or a double stop. They definitely make your solos or rhythm playing dynamic and more interesting. I cover the main intervals that you will see in popular music genres used as dyads, provide some interval guitar shapes for them, and end with some TAB examples for C, A, and E chords.

All the common guitar dyads, also called double stops, are the most harmonious intervals from the major scale. If you do not know all the intervals, then check out my Music Intervals Article. The music intervals most often used for dyads are the ones that sound good – plain and simple.

The intervals for scales or chord involve some form of 2nds, 3rds, 4ths, 5ths, 6ths, 7ths, and octaves. When it comes to dyads, no one plays 2nds as far as I know, and rarely will you hear 7ths either. So that leaves 4 interval types.

In my opinion, the best double stops involve 3rds and 6ths, and I’m sure most other guitarists would agree. But 4ths and 5ths also sound good and don’t forget about octaves though those are a little trickier in include during fast licks.

The term “Country double stops” most often involves 6ths and they sound absolutely fantastic. I definitely love them more than 3rds. I also included some tritone shapes as well. For those and the 4th’s and 5ths, just focus on the bottom 2 notes in the interval shapes I included.

Here are some basic interval shapes for the guitar on the highest sets of strings. But check out the music intervals article I mention above for full coverage on the topic. 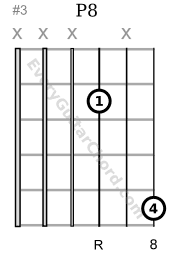 Here are some basic examples I whipped up in Guitar Pro. Make sure to come up with your own so that you fully understand how to use them.

The first TAB example has the classic Jimi Hendrix major pentatonic licks in C major. Disregard the “T” which is normally for tapping. Guitar Pro has that as a hammer-on option and I selected it instead of regular hammer-ons.

This net TAB has various A major pentatonic licks but is best suited for A blues or as the V7 chord in D major IMO. Try them for yourself. 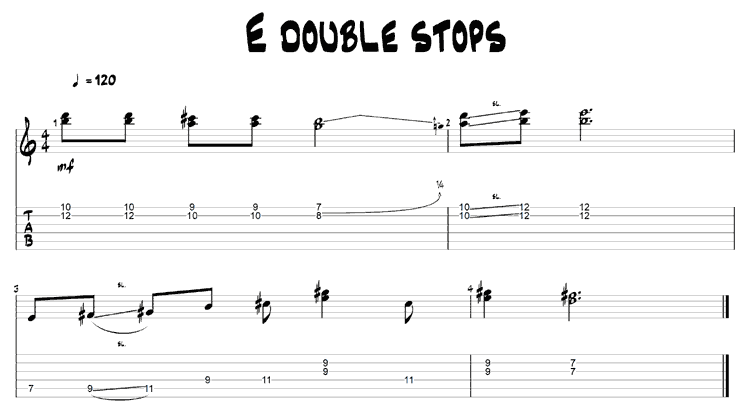 Also, give a listen to The Wind Cries Mary by Jimi Hendrix for major pentatonic guitar dyads. I personally like the tritone in a 7th chord where you hammer from the M3 to the P4 repeatedly, e.g. over a C7 try Bb-E to F-Bb on the 5th and 6ths frets of the E and B strings.

Check out these sources for more on guitar dyads:

Hot Country Guitar by Dave Rubin – Little Sister by Dwight Yoakum has nice double stops though the book is hard to find.

We’re getting there. This is the latest in guitar techniques that should get your creative juices flowing. If you get stuck playing single notes then try some guitar dyads for inspiration and an alternative approach to soloing.