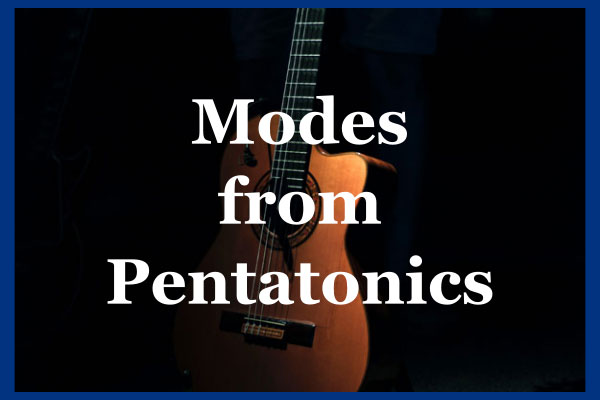 A brief introduction to modes and the pentatonic scale

If you have found modes confusing then get ready to understand them. Let’s build up to that by looking at the chords that can be built from the major pentatonic scale:

The scale degrees build the following chords: major triad, 6, add9 and a 6 add9 chord. You can use the major pentatonic built on the 1st of a major chord to solo over any of the chords. Here is the minor pentatonic scale:

You can build a minor triad, m7 and m11 chord with those scale degrees and you use the minor pentatonic built off the 1st of a minor chord to solo over those chords. If you play blues or rock, you can also apply that scale to major and dominant 7th chords.

The major scale builds major modes on the 1st, 4th and 5th scale degrees. Read my Music Intervals article if you do not understand any of the intervals listed below. Here is an example for C major but in terms of the pentatonic scale:

The notes F and B (the tritone) are the notes that are missing from the C major pentatonic scale. Or, more importantly, the major pentatonic scales are missing the 4th and 7th of the Ionian mode. The 4th and 7th intervals for the F Lydian mode and G Mixolydian modes are different, hence the different sound for each mode. Here are those scales/modes:

That’s kind of my hack but not the one I use. I’ll cover what I do below, but let’s cover  the minor pentatonic and minor modes of the major scale.

The minor pentatonic and minor modes of the major scale

Hopefully, you know that every major pentatonic can be turned into it’s relative minor pentatonic. I’ll assume you do so let’s look at Dm, Em and Am pentatonic and the minor modes from the C major scale:

So if you know all the pentatonic scale shapes, you just add in the missing mode notes and you get the mode. However, that is easier said than done.

I’ll cover this in a future article, but you should be practicing 3-note minor and major arpeggios. But make sure you recognize each note as either the 1st, 3rd or 5th of the triad. Adding in all the missing mode or pentatonic notes is much easier once you see the triad notes.

So that’s the hack – just making a simple change to the scales you already know. I kind of do that, but I also don’t really do that. Let’s look at the major scales and modes below and I’ll explain.

I like to keep things simple, and as a result, I don’t play the Phrygian or Lydian mode. Okay, maybe the Lydian, but definitely not Phrygian. And I don’t play the full mode – at least not consciously. I practice the major and minor triads and add the related pentatonic scale notes.

If you don’t know those chords, then check out my C major scale chords. You might also want to look at my CAGED System article for a comparison of the pentatonic scales and the triads associated with them.

“KNOW WHERE YOUR ROOT NOTES ARE!” so sayeth Everyone!

I do make an exception for Lydian because the augmented 4th is so distinctive. But in the beginning, you should keep it simple and just add the missing 7th of each mode.

If you just add the missing notes while playing a pentatonic it will really move you to the next level of playing. Give it a try – I’m sure you will agree.

Minor pentatonic and the Dorian mode

Similar to the Lydian mode, the Dorian mode has a distinctive interval – the major 6th. This is definitely a mode you want to play in full. You can play the minor pentatonic with just the major 2nd added, but that major 6th is worth learning when you want the Dorian sound.

The minor pentatonic is missing the same notes at its relative major pentatonic. For A minor, that would be the notes B & F, the major 2nd and minor 6th respectively. When you only add the major 2nd then you get the additional sounds of a minor add 9 and a m9 chord.

In my opinion, don’t bother learning the Phrygian mode. You can if you want to in the future, but keep it simple for now. If you really want to experiment, then just play the b9 1 fret in front of the root/tonic note.

I label the M2 as 9 instead. of 2 on the scale blocks – I always think in terms of chord names. You can use the minor pentatonic with the major 2nd to play over chords built on the 2nd and 6th scale degrees unless it is a minor 6 (Dorian chord).

The Locrian mode and Locrian pentatonic

There are 3 chords that you can build from the mode, all of which are used as substitutions for a dominant 7th chord though the m11b5 is only see in jazz:

You should know that the blues scale is the minor pentatonic with the b5 added. If you play a blues scale without the perfect 5th then that is known as the Locrian pentatonic.

If you build that pentatonic on B, the major 3rd of a G major chord, that gives you a B Locrian pentatonic which has all the notes in a Bm11b5 chord. Just drop the F# from a B blues scale and you have a great scale to play over G7 chords.

Try just adding either the major 7th or the b7 to the major pentatonic for an Ionian, Lydian and Mixolydian sound. Add the major 9th to the minor pentatonic for a richer minor scale. That simple hack will really make a difference to your lead playing. And don’t ignore the Lydian and Dorian modes as they are fantastic modes to use.

Download this image as a reminder of how the modes are related to the pentatonics. Remember, a major pentatonic has all the notes in a 6 add9 chord, while the minor pentatonic scale has the notes of a m11 chord.

7 Types Of Music Notation For Guitar

What Is A Triad? Triads In Music Theory For Guitar