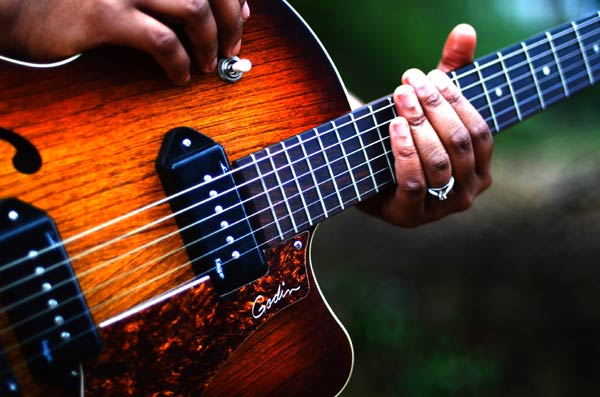 The augmented scale is a symmetrical scale and gives you the option of building minor, major or augmented chords from the scale.

I have guitar chord patterns for all the chords from a C augmented scale and discuss how to use the augmented chords in chord progressions.

Also, I list popular song examples that use some of the chord types so that you can see the practical application of the chords.

The augmented scale is a 6-note symmetrical scale. All that means is the scale has symmetry ascending and descending and that it divides the octave into repeated intervals.

Other examples of symmetrical scales are the whole tone scale and the diminished scale. Take a look at the Dolmetcsh Music Dictionary page on the augmented interval, augmented fifth and augmented scale for a more in-depth definition.

You can also build an augmented triad on the tonic note of the Bebop Major, Whole Tone, and Altered scales and on the 3rd degree of the Harmonic & Melodic minor scales.

The first formula for the augmented scale is to add the notes of two augmented triads that are separated by a half step. For example, B+ has the notes B-D#-G and C+ has the notes C-E-G#. That leads to the following:

So it’s up to you which formula you use to build the augmented scale.

The number of chord types you can build on each scale degree is limited, and there is a symmetry of chord types for notes separated by a major third.

There is also the strange chord construction options that occur in other scales like the altered scale. You have a choice of different 3rds and 5ths. The chord types built from the augmented scale are:

The notes from the C+ triad (C, E, G#) are the notes that can have a major or minor third, and a perfect or augmented 5th. The B+ triad (B, D#, G) can only build augmented triads.

To summarize, the 6 notes of the augmented scale all build augmented triads. The tonic note of the scale, C in this case, also builds a major and minor triad. All three C triads also have a major 7th interval available to add to the triad. This gives the following chords:

Those same chord types can be built on the notes E and G#\A♭. A song example that uses chords from the augmented scale is “Giant Steps” by John Coltrane where he uses the 3 major triads in a B augmented scale to create 3 key centers.

Check out the table below to see all of the chords that are from the C augmented scale. The columns Equal1 thru Equal3 are for chords that have the same notes as the Chord Name column.

Note: When it came to A♭ vs. G#, I chose G# for the minor chords but A♭ for the major and augmented chords. The exception in the table above is for the equal chords of C+ and E+. I did the same for E♭+ vs. D#+ because E♭ is the III+ chord in the C Harmonic & Melodic minor scales.

I’m only including guitar chords for the augmented triad, maj7#5 & m-maj7 chords. I’ll have the major, maj7 and minor chord shapes in articles associated with those chords and in their appropriate categories.

But I am including a minor chord here – the m-maj7 chord. And that is because it contains an augmented triad within it and it equals a 6+.

Now I know some theory guys are rolling their eyes at the mention of a 6th chord with a sharp five. I know – I don’t consider it a chord either but I did see a 6+ chord in a U2 song. They probably should have notated it as an Am-maj7\C instead of C6+ (or whatever the chord letter was).

Closed and bar augmented guitar chords from the augmented scale

The augmented triad creates tension when it is played and there is an augmented triad within the maj7#5 and the minor-major 7th chord. That tension needs resolution similar to the tritone in a V7 chord, though the resolution is not as strong.

Take a look at my article on The Triads in Music to read more about the augmented triad.

The augmented triad can be used in place of the V chord. For example, a C augmented triad (C+) chord will resolve nicely to an F major chord. I think it is great as the final V chord in a blues turnaround.

A Caug chord will also resolve to an A minor triad, vi for C. C augmented is the ♭III+ chord in both A harmonic and melodic minor scales.

Actually, each note in the augmented triad can act as a major 7th leading tone, so a C+ chord (C-E-G#) will resolve to the major AND minor chord one half-step above each of the chord tones:

Quite a versatile chord. If you are writing a song, using an augmented triad would be great for a section with a change of key to Vi major or ♭II major or minor. The last one being quite radical. So try using a C+ chord for a key change to A major or D♭ major or minor.

You could also play just the augmented 5th interval with surrounding intervals. An example is the song “Kashmir” by Led Zeppelin:

Here are a lot of examples that use an augmented triad:

Beatles: Fixin’ A Hole, Michele, Real Love, I Want You, I’m Happy Just To Dance With You, All My Loving, I Am The Walrus, Oh Darling, Dear Prudence
Grateful Dead: Casey Jones
Allman Brothers: Stormy Monday (their version)
Stevie Wonder: You Are The Sunshine Of My Life, If You Really Love Me
David Bowie: Never Let Me Down
Beach Boys: Orange Crate Art, Friends, Warmth Of The Sun
Sting: Mad About You
The Who: Quadrophenia, Dr. Jimmy
Led Zeppelin: The Rain Song, Stairway to Heaven
Pink Floyd: Gunner’s Dream
Merle Travis: Cannon Ball Stomp
Ricky Skaggs: Life is Too Long (To Live Like This)
Silverman’s Folk Song Encyclopedia: The Rose of Tralee page 162 Vol. I, O Canada page 286 Vol. II

This augmented chord can act as a substitution for a regular major 7th to create tension. It also resolves to a IV, vi or VI chord as in Cmaj7#5 to F, Am or A.

I couldn’t find any popular song examples, but jazz guys use this chord a lot so I’m sure there are a lot of jazz songs with this chord in them.

The maj7#5 chord has a slightly nasty sound to me. I just don’t like it, therefore it will never be a chord in my guitar chord box. Let me know if you saw this chord in any song that is not a jazz tune.

I’m not a fan of this chord either – sounds like dirt (if dirt made a sound).

It’s common in jazz as a tonic minor chord to create tension. Whatever. In popular music, it’s common to use it chromatically as in this E minor example:

Here are some song examples that use a m-maj7 chord:

Coldplay: Speed of Sound
Stevie Wonder: I Just Called to Say I Love You
Beach Boys: When I Grow Up
Beatles: Boys, Michele, Something, Real Love, Cry Baby Cry, Baby You Can Drive My Car
Pink Floyd: Us and Them
The Who: Quadrophenia
Silverman’s Folk Song Encyclopedia, Vol. II: Wanderin’ page 13, Let Us Break Bread Together page 102

I’m not a fan of the augmented scale for soloing or the maj7#5 chord. For augmented triads, I would just use a whole tome scale riff. It’s an interesting scale, but I’m not a jazz player.

So I don’t use the augmented scale, but I do like augmented triads and augmented guitar chords that have a ♭7 in them. Check my article on Chords From Scales for a list of augmented 7th chords as well as my total list of 77 chord types.

G7#5#9 Guitar Chord Chart: Finger Placement & How To Use