First, if you do not know all of your intervals, then you should read my Music Intervals article. Otherwise, you will not understand a lot of what I am covering. But here is a brief explanation of intervals:

Any two notes played individually or simultaneously create what is known as an interval. An interval is the distance between any two notes of the chromatic scale. The intervals can be either minor, major, diminished, augmented or perfect. We are concerned with the augmented intervals for this article.

I don’t accept goofy intervals names such as augmented 3rd or augmented prime. I understand why those interval names occur. As a matter of fact, I had to notate an interval in my Diminished Modes article as a d4 (diminished 4th).

In my opinion, there are only three augmented intervals that you will use in a chord:

Augmented 2nd: also called #9 and notated as A2, it is the 2nd note of a scale or mode that is 3 semitones above the tonic. For example, for a C chord or scale, D# is the augmented 2nd.

Augmented 4th: also called #11 and notated as A4, this is the tritone note and is 6 semitones above the tonic. For example, for a C Lydian chord or scale, F# is the augmented 4th.

Augmented 5th: also called #5 or +5 and notated as A5, it is the 5th note of a scale or mode that is 8 semitones above the tonic. For example, G# is the augmented 5th of the note C.

D# and E♭ are enharmonic equivalents

F# and G♭ are enharmonic equivalents

G# and A♭ are enharmonic equivalents

Don’t worry if that is confusing to you. I only mention it because some players may see the #9 and #11 as the ♭3 and ♭5 from the Blues scale. Let’s get into building augmented chords so you can understand the augmented intervals better.

The augmented triad and related chords

I’ll add 2 of my favorite chord voicings below each chord type. Here is an image describing all the symbols on my chord blocks: 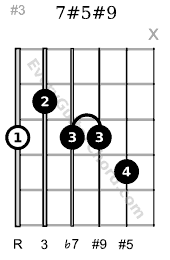 Other chords with augmented intervals

There are other chords that have augmented intervals in them. Here is a list of them, but for more information read my F Lydian Chords and Altered Chords articles.

There are generally just two scales that are considered augmented scales. They are the whole tone scale and the augmented scale. However, there are augmented modes in both the harmonic and melodic minor scales.

There are 2 different methods when it comes to the augmented scale formula. One involving augmented triads and one with alternating minor 3rds and minor 2nd intervals. I wrote an article on the C Augmented Scale chords, but here are the 6 intervals and notes:

The scale can also be looked at as 2 augmented triads separated by a half-step or semitone. In the case of C augmented that would be a C+ (C-E-G#) & a B+ (B-D#-G). Hopefully, you noticed the enharmonic equivalents in the scale. Baug has a D#, not an E♭.

Other than the augmented triads, the only other augmented chord that can be builts is thee maj7#5 chord on the notes C, E & G#/A♭. Here are 2 A♭maj7#5 guitar chords:

Some websites will notate the last note as A# but I think it is better as B♭.

There is one straight-up augmented mode from the harmonic minor scale plus 2 other modes that can build augmented chords due to the #5/♭13 interval.

Here are the 3rd, 5th and 7th modes from the A harmonic minor scale:

This is technically the only augmented mode from the harmonic minor scale. You can build a C+ and a Cmaj7#5 chord.

You can choose to drop B the perfect 5th and replace it with C(B#) the augmented 5th. As a result, you can build the following augmented chords: E+, E7#5, and E7#5♭9. Any of those chords resolve nicely to A or Am.

The diminished 4th is actually the major 3rd and the minor 6th can double as the augmented 5th. The only augmented chord possible from this mode is the G#aug triad.

Similar to the harmonic minor scale, the melodic minor has one “true” augmented mode and 2 additional augmented modes. The mode built on the 4th scale degree, the Lydian Dominant, does have an augmented 4th interval, but I’ll just be covering the 3 modes that build augmented triads. I’ll use A melodic minor again as the example:

When to use augmented chords

Use the chord tendencies I mentioned above. I personally never use a maj7#5 chord (I don’t like the sound of it). Jazz guys prefer that chord though as a substitute for a maj7 chord.

The maj7#11 chord is a Lydian chord and is a great chord, so use it as a IV chord or as a substitute for a maj7 on the tonic (I) chord.

I think I covered every augmented interval, chord, scale and mode that you will see in music unless you go to some truly exotic scales. Some of these chords are only found in jazz tunes but you should give them a try. I like all the augmented chords with maybe an exception for the maj7#5.

When it comes to playing lead over augmented chords, then there may be some scales or modes above that you can add to your toolbox. Most of these chords rarely last longer than 1 measure, so I would just use an arpeggio lick. But for you scale junkies, you can get an outside sound by choosing a mode or scale that doesn’t match the chord progression.

Check out the Augmented Music page on Wikipedia for more on augmented sounds in music.

G7#5#9 Guitar Chord Chart: Finger Placement & How To Use