The G7sus guitar chord is a great alternative to G7 in the key of C major. There are three other major scales that also builds a G7sus chord, as well as the harmonic and melodic minor scales. I cover all you need to know about the G7sus chord, how to use it and I have 11 open guitar chords for G7sus, G9sus, and G13sus.

G7sus is similar to a G7 chord except the major third is replaced by the perfect 4th, and therefore does not contain the tritone B-F that exists in C major. However, it still has a strong tendency to resolve to C major because it has the “F” of the tritone. C major is one of the major scales that build a G7sus chord.

Here are the intervals and notes in the chord:

It resolves best to C major but also to G, Gm or back a whole step to F. You can also use it before a G7 chord or in place of a m7 chord in a ii-V-I progression. For example, try substituting a Dm7 with a G7sus since there is only one note different between those 2 chords.

Similar to the G7sus chord are the chords G9sus & G13sus. They resolve the same as G7sus. Here are those chords in detail:

Scales that build a G7sus chord

The 2nd, 3rd, 5th and 6th scale degrees of the major scale all build 7sus chords. For the note G that would be:

I have 4 open G7sus guitar chords, 5 G13sus chords but only 2 G9sus chords. Check the Beatles songs’ Come Together for an example of a G7sus and The Long and Winding Road for a G9sus.  I don’t have any examples of a 13sus chord. 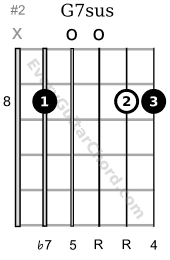 Add some variety into your songwriting and replace a G7 or Gm7 with a G7sus chord. Also, try the G9sus and G13sus chords to really impress your guitar friends. As with all suspended chords, remember that they are accent chords and rarely last more than one measure. As you work the chords into songs you’ll get a feel for how to use them.

If you like these suspended chords, then take a look at the following two articles of mine:

34 Suspended Chords In The Key Of C Major