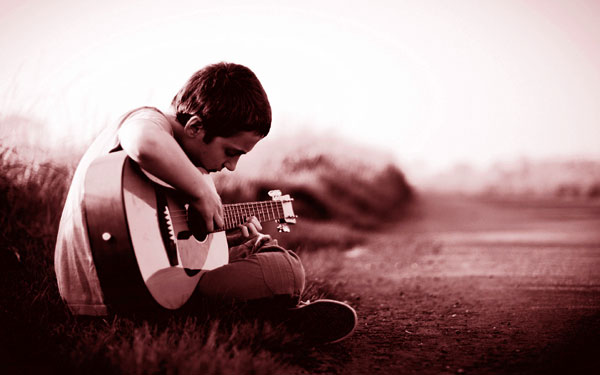 Four of the scale degrees in the major scale build suspended chords that have a minor 7th interval, also called 7sus4 chords. Those scales degrees are the 2nd, 3rd, 5th, and 6th, and for C major, those notes are D, E, G, and A. This article covers the intervals for the chords 7sus, 9sus, 13sus and 7sus ♭9, the notes for each C major scale 7sus chord, and popular song examples that use suspended 7th chords.

All but the 4th and 7th degrees of the major scale build sus4 chords, and all of those degrees build suspended 7th chords except for the tonic or 1st scale degree. So any chord with a perfect 4th, perfect 5th, and a minor 7th build a 7sus chord, or dominant 7 suspended chord.

The Dorian, Phrygian, Mixolydian and Aeolian modes correspond to the 2nd, 3rd, 5th and 6th scale degrees. If you know your modes then you’ll recognize Mixolydian as the only major mode – the others are minor. But since suspended chords are neither major or minor, that doesn’t matter.

Below are the intervals for each 7sus chord type with additional notes on the chords. If you don’t know or understand intervals then read my Music Intervals article first.

If you do that for the 7sus chords in C major, only G7 would be a chord from C major. D7, E7, and A7 would be secondary dominants. Keep that in mind when writing songs with a 7sus. The two most common chords that follow a 7sus chord (or 9sus and 13sus) would be dom 7 with the same note or the tonic major chord. So D7sus, for example, would be followed by D7 or A major most of the time.

I have 18 chord shapes for D7sus, D9sus, and D13sus. For all the 7sus chords, take a look at my article Suspended Chords in C major for the sus add9 chord voicings. The sus add9 is an inversion of 7sus chords so they are additional voicings that you could use.

D9sus chords: These are the only 2 open D9sus voicings I could find and #1 is the easier one to hold.

I could only find 8 chord shapes for E7sus and E7sus♭9.  Let me know if you know of some I missed.

E7sus chords: They all sound good but #3 is hard to hold.

E7sus ♭9 chords: All of these sound good and are easy to hold. Test them out by going to a C major chord.

G7sus chords: I only have 3 of them but they all sound good and are easy to hold.

G9sus chords: They both sound good but unfortunately you need to fret the root note with the thumb unless you can hold that note with your index finger without muting the open A string.

Here are some suspended 7th chords I found in my songbooks. I did not find any popular songs with a 7sus♭9 chord. That’s a classic Phrygian chord that only jazz players would use.

Beatles:
A7sus in All You Need Is Love and Revolution
C7sus in The Long and Winding Road and Hey Jude
G7sus in Come Together

Jerry Reed: E7sus in The Claw

Doobie Brothers: E7sus in Taking It to the Streets

Beatles: G9sus in The Long & Winding Road and A9sus in That Would Be Something

Take a look at my Sus4 and Sus2 Chords from C major article for more suspended guitar chords. Also, look at my article Comprehensive List of Chords for all the chords that can be built from C major.

The suspended 7th chord is not a chord you hang on for more than a measure, but it’s a great chord to spice up a measure or two that has a single chord. Try turning a regular dominant 7th into a 7sus for a beat or two and then go back to the 7th. Suspended 7th chords can also act like a V7 chord taking you back to the tonic chord.

34 Suspended Chords In The Key Of C Major