The E sus chord has the notes E, A & B and is easy to play on a guitar with open strings in standard tuning. There are also many closed and bar chord shapes for an Esus chord.

I will cover how to build a suspended chord and the keys that have an E sus chord in them. I also have 16 Esus guitar chord shapes and 1 song example of an E sus chord.

The E sus chord contains the notes E, A, and B. Those notes exist in the major scale keys of C, G, D, A and E.

The textbook definition of a “suspension” is when a note from a previous chord carries over into the next chord, commonly replacing the 3rd of the chord with the perfect 4th. Check out the Wikipedia article on suspended chords for a more in-depth definition.

But in popular music, it just means replacing the 3rd of a major or minor triad with the perfect 4th of the chord root.

Sometimes you will see “sus4” which is the same as “sus”. The sus \ sus4 chord is built with a root note, the perfect 4th and fifth of that root note. The formula for a sus chord is:

Check out my article on music intervals if you are unfamiliar with the terms 3rd, 4th, and 5th.

So that is all a suspended chord is. The major or minor 3rd is replaced by a perfect 4th in the case of a sus \ sus4 chord or replaced by the major 2nd for a sus2 chord.

The chord then loses its major or minor sound until you release the suspension and return to the major or minor quality of the chord. By the way, I personally only use “sus”, never “sus4”. If you only see “sus” then it is implied to be a suspended chord with the perfect fourth

Now that you know how to build a sus4 \ sus chord, name the notes in the following suspended chords:

Suspended chords have a sound that is often described as hollow, restless, unstable, open, or as having tension. As a result, you will rarely see a sus chord played for more than one measure in 4/4 time. I would guess half of a measure is the most common length that the chord is played.

It’s very common to play a major then add the 4th in place of the 3rd (suspended chord) then go back to the major again. You’ll often see a chord progression that alternates between the major triad and the sus chord,

I tried to find some examples of an E sus chord in all my songbooks but I couldn’t find any. A Google search didn’t help either. But I did remember a song that has an Esus chord in it”

“Jack Straw” by the Grateful Dead has an Esus chord in the intro and in other sections of the song. The song is in cut time (2/2) and the studio version opens with an E major chord for 1-1/2 measures followed by Esus for 1 beat of the second measure. That is repeated one more time then the verse begins.

The sus4 chord resolves best to its major triad, while a sus2 resolves smoothly to the major of either the root note or the 5th of the chord:

Use the E sus chord to add some variety where you have an E major chord for 2 or more measures. And remember that you can use an E sus chord in the major keys I mentioned above: C, G, D, A, & E major. 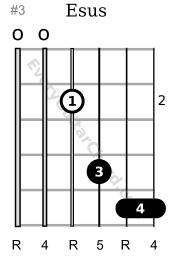 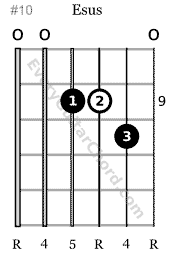 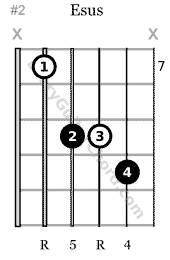 * Go back to where you left off reading

An E sus chord, like all sus chords, adds variety to a chord progression where the E major triad is being played for 2 or more measures. Add the E sus2 chord along with the E sus chord for even more variety.

It’s called improvising. If you are writing a song, bounce between Emaj, Esus and Esus2 and see how it sounds.