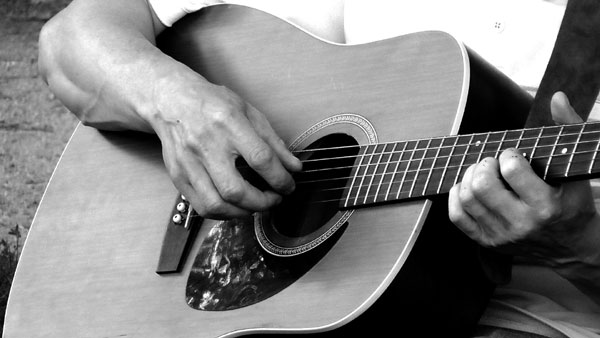 I show the scale shapes for these suspended scales and 29 total closed and open sus2 and sus4 chords for the notes D & G, the 2 suspended modes of the C major pentatonic scale.

What are suspended chords? (sus4 and sus2 chords)

This is not a beginner guitar article on suspended chords. I have two articles that specifically cover suspended chords: Music Triads and The E sus chord. If you are unfamiliar with intervals, then also read my Music Intervals article.

But here is a super quick summary. Suspended chords replace either the minor third in minor chords or the major third in major chords. The notes that do the replacing is either the major 2nd (sus2 chords) or the perfect 4th (sus4 chords).

Here are the formulas for both types:

If you only see the word “suspended” or the abbreviation “sus”, then that refers to the more common suspended chord, the sus4 type.

Suspended chords are neither major or minor and have an open, ambiguous sound to them. They are used to break up a “long” section of a single chord, to add ornamentation and embellishment or to signal a change to a new chord. They have an unsteady sound that needs resolution.

Dsus2 resolves to D major, A major or weakly to A minor.

Sus4 chords have a stronger tendency for resolution, where the sus2 tendency is weaker but it is still a nice-sounding chord. I consider both sus2 and sus4 chords as embellishments and the sus4 as a fairly strong sound to take you to a new chord or key.

By the way, the sus2 chord equals the sus4 chord in 1st inversion. For example, Dsus4 = D-G-A and Gsus2 = G-A-D have the same notes. Keep that in mind if you try to find chord voicings of your own.

If you start the scale on the note A, you get the A minor pentatonic, a minor mode of the C major pentatonic.

The note E does not build any chords because it has no 5th. But the notes D & G ONLY build suspended chords.

The C major scale starting on D is

I call this scale or mode either the Dominant Suspended pentatonic or maybe the 7sus or 9sus mode. Note that the D dominant suspended scale resolves as a V7 chord or moves smoothly to G major.

The C major pentatonic starting on G, and the resulting chords are:

Because there is no ♭7 but there are the intervals of a major 2nd and major 6th, I like to call this mode the Major Suspended scale.

The G major suspended scale also sounds great resolving to a G major triad. The fact that both of these suspended modes of the C pentatonic scale resolve to G major makes sense since a C6 add9 chord also resolves best to G major.

Since suspended chords rarely last more than 1 measure, if that, then you really shouldn’t focus on all the notes on all 6 strings. I think it’s best to think in terms of the B.B. boxes (Google “B.B. King Box”).

Just use short “suspended” boxes for a quick riff over a suspended chord. Below are the shapes I prefer.

I have the regular full C major pentatonic scale shape next to a single octave D dominant suspended scale shape, or slightly more than an octave in one of the shapes. The white notes are the root notes of each respective scale.

The fret numbers are at the bottom of the scale shapes. Here are the D Dominant Suspended (7sus) scale shapes. Notice the whole step separation of notes on each string: 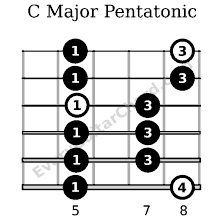 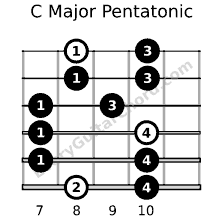 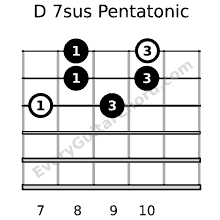 Here are the G Major Suspended scale shapes without the C major pentatonic shapes as reference: 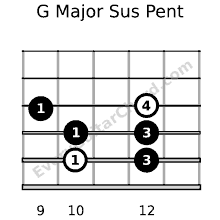 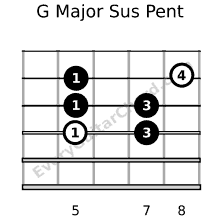 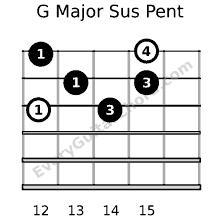 Note where the root notes are for either the 7sus or major sus pentatonic shapes. If you have a preference for the dominant suspended scale but for G, or any other key, then just move the shapes like you would a barre chord.

I only have chord shapes for the notes D & G and only the 3 note chords of sus2 and sus4. If I included all the suspended chords from C major pentatonic it would be over 80 chord shapes. That’s too many for this article.

Let’s just focus on the sus2 and sus4 of the suspended modes. You can try and find Dsus add9, D7sus, D9sus, G6sus, Gsus add9 on your own or wait until I create an article on those chords. By the way, I did find a Gsus2 chord in the song Are You Experienced by Jimi Hendrix. Let me know if you have other song examples.

It’s a good exercise to map out your own chords. Other sus chords from the C major pentatonic are Csus2, Asus, and A7sus.

Here is a graphic of all the symbols I use in my chord blocks.

I have the closed sus2 chords first followed by the open D & G sus2 guitar chords.

Special Note: The closed sus2 chord #5 is only 3 notes so triplet picking would be great. It’s a little hard to let the open A string ring out for #3 Dsus2 – it’s okay if you mute it because there is an A on the B string. 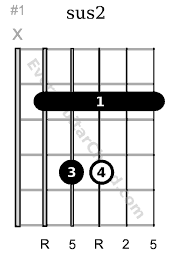 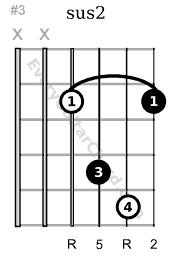 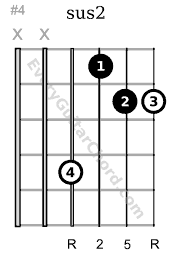 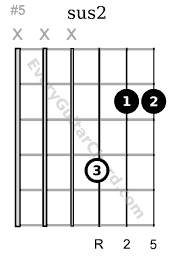 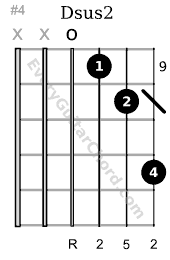 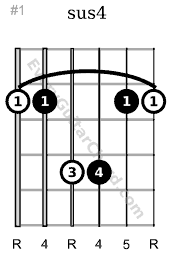 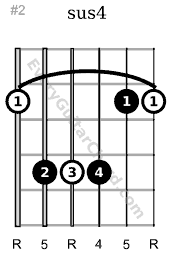 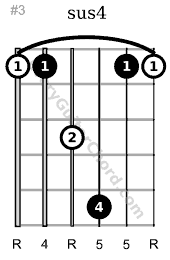 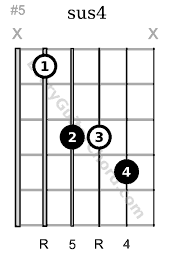 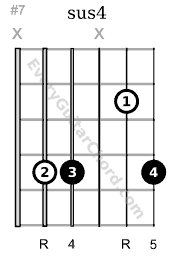 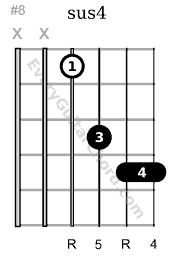 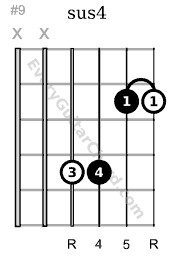 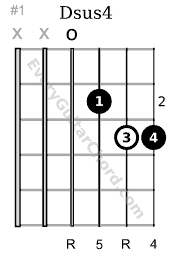 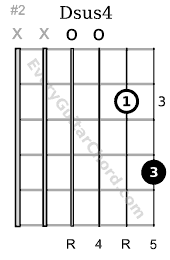 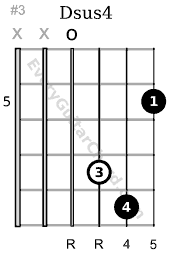 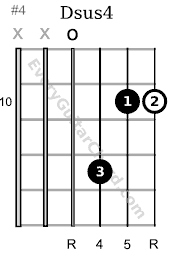 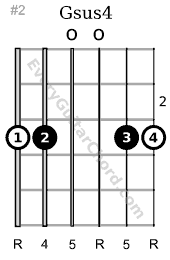 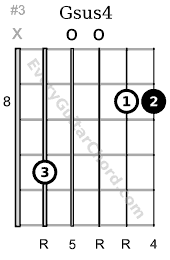 Try using boxes of the suspended scales for a different approach to soloing over suspended chords. Also, try and work in sus2 and sus4 chords into your songwriting. Also, consider sus4 and sus2 arpeggios as another option.

And of course, combine the two – go from a short suspended riff to a sus2 or sus4 chord, or vice versa. Also, take a look at my Chords from Scales article for insight into all the possible chords that can be built from various popular scales.